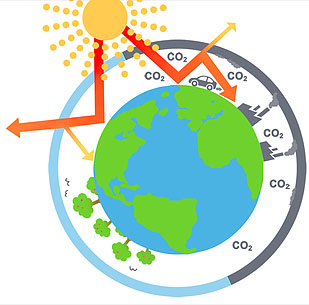 Our lifestyle consumes a lot of energy. Unfortunately, this excessive energy consumption has consequences that can no longer be doubted: the anthropogenic greenhouse effect.

The earth is surrounded by an atmosphere in which various gases are present. The most important of these gases are:

“The wavelength at which a body radiates maximum energy is inversely proportional to the temperature of the body.”

Since the greenhouse gases naturally occurring in the atmosphere are highly impermeable to long-wave radiation, this reflection into space is problematic. It is partially even absorbed by greenhouse gases and radiated evenly in all directions – even back to the earth’s surface. The result is atmospheric counter-radiation, which supplies the soil with additional heat radiation.

Too much energy we use for heating, electricity, transport and the production of all the products we often (not) need in our daily lives causes too many greenhouse gases to enter the atmosphere.

Energy is generated by burning oil, coal and natural gas, for example. Combustion generates a great deal of carbon dioxide (CO2), by far the most important greenhouse gas. In 2012, the CO2 share of total greenhouse gas emissions was 87.5%.

The increased concentration of greenhouse gases in the atmosphere increases the impermeability and absorption or reflection of the heat radiation returning from the earth.

However, this realization is not intended to cause panic, but rather to make it clear that it is high time to do something. Preliminary calculations and estimates by the Federal Environment Agency (UBA) show that greenhouse gas emissions increased by 30% between 1990 and 2010. In Germany alone, emissions increased by 1.2 percent in 2013 compared with the previous year.

The continuing anthropogenic enrichment of the earth’s atmosphere with greenhouse gases, in particular with carbon dioxide (CO2), which is mainly obtained from fossil energy, has threatening, unpredictable effects on the natural balance of the blue planet. Independent measurements by NASA and the US weather agency NOAA have shown that 2014 was definitely the warmest year since records began.

How the hurricane Kyrill, which claimed 47 lives, caused damage in the billions and reached top speeds of 225 km/h, the rise of the global sea level, which could cause entire cities like New York City or Bremen to disappear from the map, extensive desertification of fertile areas of the earth, food shortages, the spread of diseases, irreversible changes in plants and animals and countless other drastic environmental changes are seen by numerous scientists as possible, long-term effects of this global warming. Some of these effects would also further intensify the process of warming.

In an interview, Prof. Peter Lemke, Head of the Climate Science Department at the Alfred Wegener Institute, who played a major role in the reports of the Intergovernmental Panel on Climate Change, reports that

„….Meanwhile, the CO2 content of the atmosphere is higher than it has been for several million years and the emissions of recent years were higher than the IPCC had assumed in the worst-case scenarios of its last report.”

“…  even if we stopped emitting CO2 overnight, the global temperature would increase by the same amount again in the coming decades…“

According to a study published on behalf of the World Bank in 2012, a warming of four degrees would be feared to have devastating consequences not only for us but also for future generations.

Will we stop the fatal spiral of dramatic global warming?

Energy savings are the most profitable and cleanest form of climate protection and resource conservation in the long term.

In private households, heating and hot water preparation alone require 85% of the energy, another 15% is required for electricity (also sometimes for cooling units). According to the EU Green Paper, the energy efficiency of buildings in Europe is very low.

Energy consumption could be reduced by improving the energy efficiency of the building envelope.

The right combination of windows, roller shutters and sun protection can reduce heating energy requirements in the European Union by 111 million tonnes per year.

[ank_google_map]
Scroll back to top